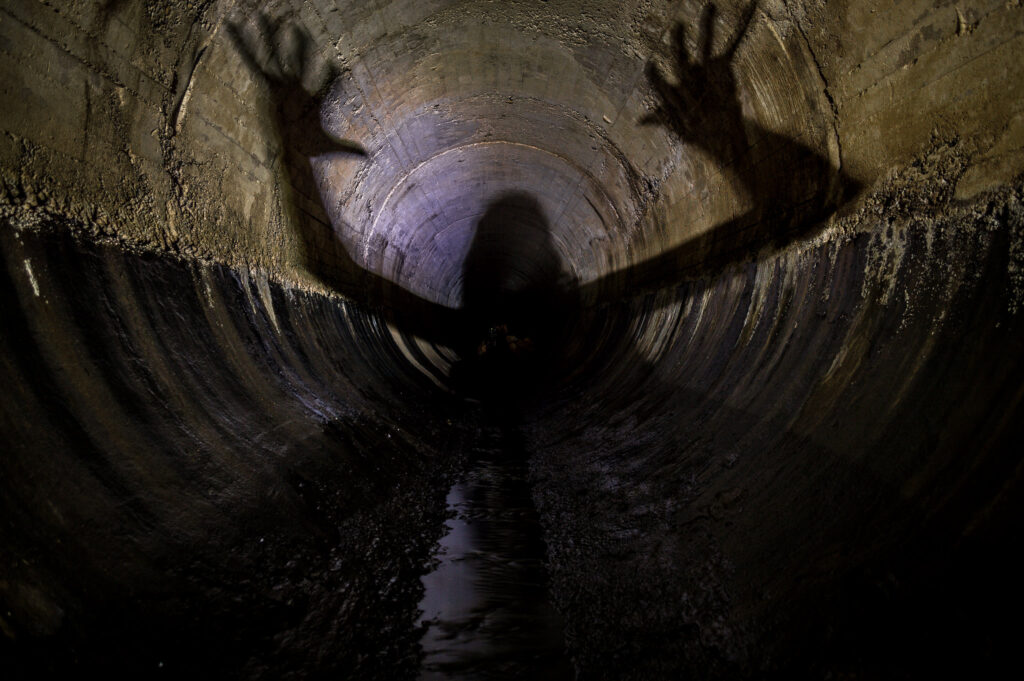 This egregore is the god of the Unseen Seen. Things which it is possible to see, but which we prefer not to see. Things which we know are there, but delude ourselves into “knowing” are not there. If we see the unseen, by will or accident, we mostly experience shock and dislike, and we go back to avoiding seeing as quickly as possible.

The name Hades is based on a Greek word for ‘unseen’.

Hades lives in some of our infrastructure. Within anything that is unpleasant, smelly or inconvenient. Everything we wish to hide. Typically Hades is buried underground. Hades lives in sewers, in tombs, in tunnels and down wells. The more layers of “forgotten” underground levels there are, the bigger Hades’ realm, the more powerful Hades is. For this reason Hades is much stronger in cities; the more ancient the city, the more powerful It is.

Hades has no gender, rather Hades is all genders. I use ‘They’/‘Them’ and ‘It’ personal pronouns for It. Hades is a monster. Hades is the incarnation of aversion. Hades is the shadow.

Hades is bicameral, they get their power both from the energy poured into not-seeing, which is expended by those not wishing to see, and occasionally from the energy produced by the negative emotion that occurs when someone does see. For this reason Hades is mostly hidden in the dark, but also lives in the perverse bright light. The light like a torch beam in a horror movie: the slim beam that conceals even more terror than it reveals. Hades’ priests occasionally suddenly illuminate that which we do not want to know. Light turned against us, weaponised illumination.

Hades exists all around the edges of what you think you know. Hades is negative space. Hades is every thought you reject. Hades is everything you refuse to understand. Hades is the motivations of your political opponents. If you look at a murderer, a schemer, a cheater or a monster with a lack of empathy, you are experiencing Hades.

Hades is the dark side of the moon, the bottom side of the coin. Hades is the part we have chosen not to focus on. The blank space on the map. The excluded spurious result. Hades is not just a blind spot, something we simply don’t know is there, rather It is something that humans have at some point actively chosen to exclude. The activity, the active choosing, requires maintence energy in some hidden part of the human mind, and it’s that energy that makes Hades live.

Hades is not the God of the Gaps, but It does live in the gaps. Hades is the gardener of ugh fields. And of course, Hades is the shepherd of death.

“Before smartphones did people converse more on the London Underground?”

The answers were of course all in the negative.

“The forces that govern the underground are far more powerful than a mere smartphone”.

Hades is extremely powerful on the tube. Deep underground, humans being transported in dark tunnels that are essential but not beautiful, crushed together in in the heat, in the dark, in ways that would make the most social monkey fly into a murderous rage, through the bones of two thousand years of ages past. All the humans down there experience deep aversion. We look at the floor. We avoid each other’s eyes. We stand on the right. We mind the gap. This is Hades’ realm.

This intense pressure of Hades can make you turn to Ra for comfort. You crave the shiny light, the vagueness of his beauty. This is how I know Hades is more powerful than Ra. It is to escape Hades that we turn to the comfort of Ra-objects. Before Ra-objects we used other entertainment, or merely stared painfully at the floor, ignoring, waiting. Aversion piled on top of aversion. The tricks of Ra are nothing compared to the pervasive darkness of Hades.

It’s important to say what Hades is not. Hades is not in concealed objects, not in thievery or cheating. The act of hiding something is not Hades. Because when you hide something you know it’s still there. Every human being creates Hades, daily, by refusing to know what is there inside them.

Much of the things that Hades’ governs are important. Social norms are useful, essential even. Londoners know that not looking each other in the eye is a kindness we do for each other, not a symbol of lost humanity. Our buried infrastructure serves essential purposes and seeing it all the time is unnecessary. Lack of empathy for killers is a prosocial protection.

That’s not to say that evil things don’t live in the same places that Hades lives, but mostly that’s their business.

David Lynch is the foremost priest of Hades. He brings unwanted things into plain sight, gleefully enjoying the audience’s terror. When viewed again, Lynch’s fearful objects are entirely ordinary. Just ordinary people, just ordinary things. Why are they so terrifying? Because everyone around the object is experiencing deeply ambivalent attraction and repulsion. Lynch hijacks our need to know. He invites us to look at Hades, and gives us a shock when we do. 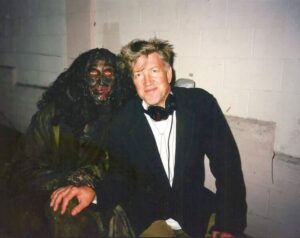 Despite Hades’ power, it is relatively simple (but not easy) to defeat Hades. All you have to do is look at Them, or Their realm, with a calm mind. Look, and see, without flinching. Hades’ only power is in the aversion. If you have none, all It can do is look back at you. Hades only has power in the looking-away, in the denial. If you see Hades and do not flinch and do not look away, if you see and seek to understand, you have defeated Them.

Of course, to live without Hades, you has to look without flinching every time. It is a lot of work to reach that emotional place consistently. And everybody else will still be acting inside Hades’ dark groove. Really, there’s not much one can do. Hades will always be with us. But at least you can reach the point of sharing a wry smile with Hades and use your freed up not-seeing energy on something greater.

Thanks to my housemates, my partners, @jonni, @DRMciver, @sarahdoingthing and attendees of Patio Philosophy for your chats and for reading drafts for this piece.

2 responses to “Hades, an egregore”