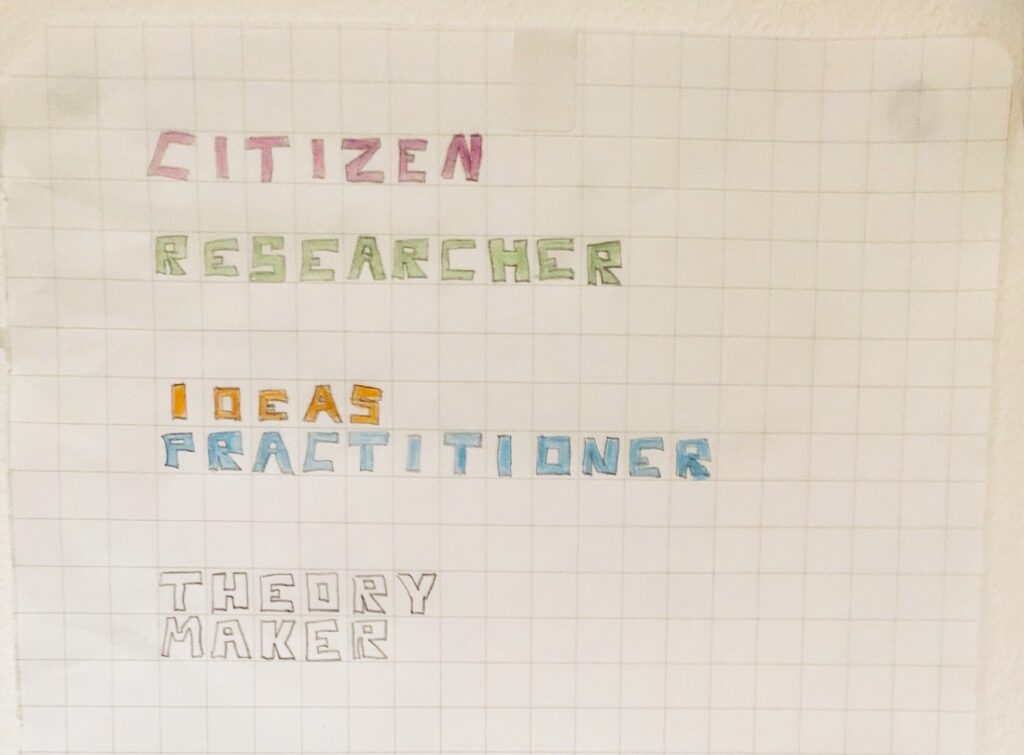 I have this problem where I get up in the morning or go to bed and worry about what I’m doing with my life or what I like or what my purpose is. It happens really regularly, it pops up in my diary all the time when I review it.

This is particularly weird because about three years ago I chose a purpose. Or at least an idea for a purpose, and leaned into it more than I had ever leaned into a purpose before. It’s the thing I do when I’m not earning money. Essentially, for the last three years I have had an answer to that question of meaning (the answer is more or less this blog, in case you’re wondering). But once every few months or so I wring my hands and toss and turn in bed and get all angsty in my diary about whether I’m doing anything meaningful.

So I had the idea of putting typed out reminders on my wall saying what I do and what my life is about. I haven’t acted on that idea, even though it’s a good one. Or I hadn’t, until the other day when I had a breakthrough.

I decided to give what I do a name.

One of the problems about being self employed is that there is no longer an outside power motivating half your waking hours. The mental effort required to set one’s goals or systems for achieving goals is often little appreciated. The cognitive load of deciding how to tidy is much bigger than actually doing the tidying. Having an outsider with some legitimacy come along and tell you a system for tidying is a huge boon. I’d say 80% of the effort is tied up there.

I think this goes double if you’re not sure you have the authority or the legitimacy to do so in the first place.

What gives a person legitimacy? An academic institution, very long years of experience in a job, running a successful business or getting a book published seem to denote legitimacy in society’s eyes.

Long ago I gave up on the academic route to legitimacy as too narrow, expensive and boring. But it is easy. Getting letters after your name, speaking the secret language of the learned and being able to name drop or even meet the right researchers and gods in your field is your reward for the boring narrow expensive time sink that is academia.

You also get a rubber stamped pre-approved curriculum of study that actually has a start and end. No worrying that you’ve missed some basic thing because you haven’t read the “right” books for you. No imposter syndrome, no looking over your shoulder for people laughing behind their hands at your naive errors.

It’s hard to make your own authority, even if it is more fun.

I decided my route to ‘fame’ would be blogging and tweeting. Reading books on a whim curriculum, generating new ideas or at least describing old ideas in a more accessible way. Legitimacy sort of comes from views and likes and retweets. From the esteem of my Twitter peers. Perhaps I’ll get to write a book one day. This is all very nebulous though. It’s not easy to sum up to a new aquaintence who, vaguely outraged at the notion that I only work 4 months a year, asks the question “so what do you do the rest of the time?” “Philosophy” is the word I’ve often used but it feels wrong because it gives the wrong impression to others. It also does nothing to help describe what I’m doing hour by hour, week by week.

If you’re going to name something, it helps if you understand it. During the course of coming up with a name for what I do I had a lot of ideas about Where Ideas Come From which I think I’ll split off into a separate post.

But as a purpose I try to: find ideas and work with them. So what kind of job title is appropriate for that activity?

Well there aren’t that many synonyms for ‘idea’ but ‘insight’ and ‘theory’ are two of them. In terms of the wrangling, I felt inspired by the word ‘practice’. As a noun, only two types of people have a practice: artists and doctors. It’s pleasing how different these two roles are and how they seem to be on the opposite sides of the fence. However I myself have been an artist and while I’ve not been a doctor I am quite a STEMy person so this seemed to fit. Added bonus, both these people have phyiscal locations where they practice, ie a studio or an office.

This is how I got ‘ideas practitioner’, ‘insight engineer’ and ‘theory maker’.

Unable to decide, I mentioned this list to friends and it became clear that they actually prefered the combination ‘theory engineer’. Given the title of my blog it now seems utterly absurd that I had to take a journey this long to figure it out. None the less, here we are.

Hello, my name is Jessica and I’m a Theory Engineer.

There have been a some benefits to naming what I do all day.

I had to think deeply about what I actually do, both instrumentally and in terms of goals.

Some of my anxiety was tied up with the fact that I couldn’t really give a good answer about what I actually do hour by hour, week by week. When I formalised the fact that I “try to find ideas”, I realised that all the time I spend reading, engaging on Twitter and lying around daydreaming all count as work-related activities (if I want them to). In the past I had dismissed these as not counting towards anything or a “waste” of time. But in fact they represent hundreds of hours of work per month. This realisation also gave me insight into ways to find ideas more efficiently, if I want to.

So hello, I’m a Theory Engineer, please step into my office 🙂